I was heading west along the Columbia Gorge last fall when I came across these two beautiful bald eagles perched on a branch of a tree just off Interstate 84 a mile or two outside of The Dalles. I pulled over onto the narrow shoulder, got out of my truck and, with cars and trucks flying by me, aimed my camera and started snapping photos. The eagles were no more than 30 yards off the interstate. I shot about 15 photos before they flew off heading west along the Columbia River. 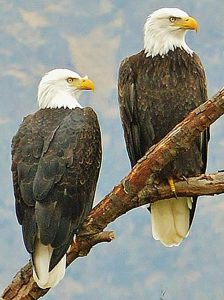 I got back in my vehicle, took a look at the photos and was devastated to find I had the camera at the wrong setting – the photos were so dark you could barely see the eagles. Lamenting my lost opportunity, I pulled back onto the interstate and began heading west once more.

No more than a minute later, I saw the same two birds perched on another tree branch, again, just off the interstate. Not believing my dumb luck, I pulled over again, put the camera on the proper setting, got out and walked closer to the eagles. I was worried my return would annoy them and was sure they would fly off once more, but they remained, stoically looking east. I snapped off about 20 photos before returning to my truck. I’m not sure the eagles took even a moment’s notice of me, but I’ll never forget them.

I’ve since traveled the same route on several occasions on my way to Portland or Eugene and have twice spotted two bald eagles in trees near I-84. I don’t know if they are the same two eagles, but I tell myself they are. Anyway, I like to think so.