The national and Oregon averages for a gallon of gasoline are both at their highest prices of the year so far and will keep climbing this spring. 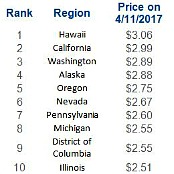 “The national and Oregon averages are both at their highest prices since September 2015,” Dodds said. “Increased driving demand, the switchover to more expensive summer-blend gasoline and higher crude oil prices are putting upward pressure on pump prices.”

Oregon is one of 48 states and the District of Columbia to see prices rise this week. The largest weekly increases are in Florida (+12 cents) and Michigan (+11 cents). The only two states where prices went down week-over-week are Utah (-2 cents) and Idaho (-1 cent).

Oregon is one of 45 states and the District of Columbia to see prices increase in the last month. The largest monthly increases are in Ohio (+21 cents) and Indiana (+21 cents). The national average is two cents more and the Oregon average is seven cents more than a month ago. The only states to see prices fall month-over-month are Idaho, Utah, Hawaii, California and Montana. All saw decreases of five cents or less.