Eleven months of social distancing, isolation and distance learning came to a head Monday night as parents and students vented their fears and frustrations before the Hermiston School Board.

About three dozen people turned up to voice their collective dissatisfaction with the continued comprehensive distance learning that has been put in place since the start of the pandemic nearly a year ago. Many more rallied outside carrying signs urging the school board to bring students back to class.

“I’d like to see you guys fight for us a little more,” said Hermiston High School senior Chase Elliott. “You guys have not had a good plan for fall sports and you have failed to communicate with parents and athletes.”

Elliott’s frustration was apparent as the HHS quarterback recounted breaking his leg in the first game of the 2019-20 season, and his hard work to get back for the following season, only to find it has likely been permanently canceled, costing him half of his high school football career.

“If sports are taken away from so many kids, it’s not going to be good for the future,” he said.

HHS senior Makaylee Young lost her junior track season and told the board many of her fellow students are suffering emotionally and academically.

Amy Weiseler, a mother of three, said she has long been a supporter of the school district and even transferred her kids back to Hermiston when her family moved to Stanfield. She didn’t, however, mince her words about her feelings on the past 11 months.

“You’ve let me down,” she told the school board. “You’ve let our kids down. Our future Hermiston doctors, dentists, engineers and farmers are our kids. They are watching the adults throw up their hands in defeat.”

Many parents have urged the district to work with the state to find a way to open schools in Hermiston and have not been satisfied with the answer that it depends on the latest COVID case metrics.

“The trust between the administration and board and the community has been broken,” Weiseler said. “I am begging you – do more and say more. Five thousand kids out of school for a year cannot be our legacy.”

Kathy Madore, a mental health case manager in Hermiston, spoke about the impacts she is seeing on students due to the school shutdown. She spoke of increased incidents of kids intentionally hurting themselves, serious cases of depression and a rise in suicides.

Heather Bacon, a clinical psychologist in Hermiston, asked if the board had plans to address continued mental health issues after schools reopen.

Another parent, Chris Elliott, offered some tough love Monday night. He was angry at what he considers to be a lack of effective communication between the school district and the community. He said he found out from the media that the Mid-Columbia Conference football season for Hermiston has been postponed.

“We are behind you,” he said. “We love you guys, but it’s time for you to lead. You’re running a business. You’re going to lose family members who will move and leave this community.

“Transparency is all we ask. Nothing more.”

Sally Hansell said the issue is really one of liability – the fear of getting sued if the district reopens and people get sick. She asked the board to consider taking a closer look at Oregon House Bill 4402, which says public and private schools cannot be held liable as long as they are following the state’s and Oregon Health Authority’s guidelines.

She said the Oregon School Boards Association has already considered the likelihood that some districts may choose to reopen even without following the state metrics to the exact letter and has provided guidance for those situations. 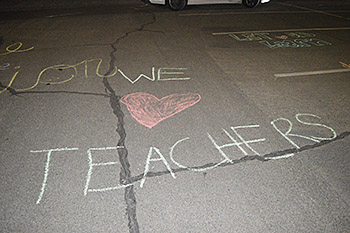 She also asked if the board had considered purchasing additional liability insurance.

After listening to more than a dozen speakers, board members took a breath and offered their thoughts.

“I very much appreciate the rawness of what we heard this evening,” said Board Chair Josh Goller. “It’s unsettling and I know how difficult it is for you to come here and share difficulty stories.”

Board member Ginny Holthus said she and the board empathize with the parents and students.

“Everything you said, we feel,” she said. “I just want to say I’m sorry because we feel exactly as you do.”

Board member Mark Gomolski took personal responsibility by saying, perhaps, he could do more to communicate more openly to the public.

“We understand this is hurting everyone,” he said. “But we’re going to have do a better job at communicating. I promise you that.”

Karen Sherman, a longtime board member and former teacher, told the audience that there will be concrete changes in the way the district provides information to the public.

“Give us a few days to digest what we’ve heard,” she said. “We’ll come up with plans to improve communications with the community.”