The Hermiston School District can expect to add 1,200 students to its classrooms in the next 10 years, according to an analysis by the Portland State University Population Research Center. 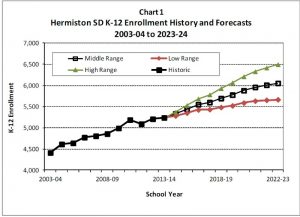 The 55-page analysis uses numerous indicators such as birth and fertility rates, migration statistics, employment, and economic trends, to statistically predict low, medium, and high growth scenarios over the next 10 years for the Hermiston school community.

A similar report in 2007 was one of the key instruments used by the board to outline the need for additional campus space included in the 2008 bond program to meet growing student populations.

“Despite the recession impacting our country after the 2007 report was released, PSU’s estimates were very accurate,” said Smith. “This updated study provides a revised glimpse into out near future; and that future is significant and continued growth for our district and community.”

Even at the middle range growth assumption, labeled as “most probable” by PSU, the district is expected to see an additional 800 additional students come into the schools over the next decade, almost identical to the previous ten-year actual growth.

“The report shows that our high school will balloon to nearly 1,950 students by the 2023 school year, a 33-percent growth in numbers over current levels, and nearly twice the size it was just prior to the campus updates performed in 2002,” according to Smith.

Required by statute, the Hermiston School Board established a Facility Master Planning Committee last spring that has been meeting monthly to review all aspects of the district’s facilities, infrastructure, and growth. The committee is expected to present its report to the Board in March, which will summarize the key components of their work, including facility conditions, enrollment trends, student capacity analysis, and site safety and security recommendations.

The entire report can be downloaded from the district’s website.

No Curbside Recycling in Hermiston’s Future