On a sunny January afternoon, the words spoken by Dr. Martin Luther King Jr. on a sunny August day 55 years ago were recalled with the hope that each person do their part to make the slain civil rights leader’s dream come true.

A large crowd gathered in Hermiston on Monday to honor the work of King. The occasion was the annual community walk put on by Hermiston’s Black International Awareness Club.

Carrying signs and singing songs, the marchers made their way down Gladys Avenue, turning onto Highway 395 and onto Main Street, up Third Street and back down Gladys before arriving at the steps of Hermiston City Hall. 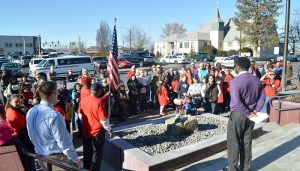 It was there where Hermiston City Manager Byron Smith spoke of the inspiring words of King. Smith was attending college in Arizona at a time when the state was reluctant to establish a national holiday in honor King. Smith said he studied King, read his works and was inspired by his message.

“He did a lot of great things for this country and I’ve benefitted from those things,” Smith said. “If we follow his lead, we can continue to make this country a better place to live.”

Smith read an excerpt from Martin Luther King Jr.’s “I Have a Dream Speech:

“I have a dream, too, for my five children, who are not all white,” Smith said. “That they will be judged by the content of their character and not the color of their skin.”

Following Smith’s remarks, the crowd walked over the United Methodist Church where the crowd was treated to songs performed by the St. John’s Little Angels and the Morning Star Youth Choir and a keynote address by Brandon Clay. Also speaking Monday was Eddie de la Cruz, chairman of the Hermiston Hispanic Advisory Committee.

To read the full text of Martin Luther King Jr.’s “I Have a Dream Speech,” click here.