Pump prices are fairly stable this week, with the averages in 45 states, including Oregon, changing by three cents or less.

The national average is at its highest price since September 2014. The Oregon average is a little lower than its year-to-date high of $3.80 reached on August 19.

The latest decision by OPEC and its oil-producing allies to maintain their planned gradual increase in crude oil output will not help lessen supply constraints, so any relief will most likely have to come from the demand side.

“The switch to standard time and the resulting earlier sunset may lead to lower demand for gasoline. Drivers may head straight home after work instead of shopping or running errands in darkness,” says Marie Dodds, public affairs director for AAA Oregon/Idaho.

California ($4.63) and Hawaii ($4.34) continue to have the most expensive gas prices in the country and are the only states in the nation with averages above $4 a gallon. All other states and the District of Columbia have averages above $3 a gallon.

Oregon is one 47 states and the District of Columbia with higher prices now than a month ago. The national average is 15 cents more and the Oregon average is 2-and-a-half cents more than a month ago. This is the third-smallest monthly gain in the country. Alabama (+33 cents) has the largest month-over-month increase. Idaho (-3 cents) has the largest monthly decrease in the country. 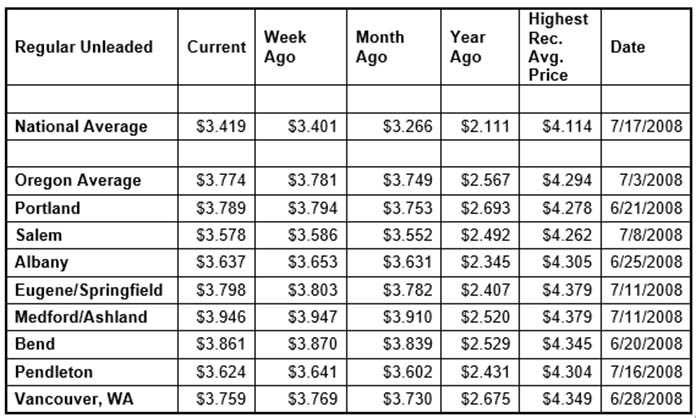