Gas prices continue to slide with 39 states, including Oregon, seeing double-digit decreases this week. But an uptick in gas demand as more people fuel up could slow or even end the steady declines in pump prices.

For the week, the national average for regular tumbles 14 cents to $4.19 a gallon. The Oregon average slides a dime to $5.05.

“A recent survey from AAA showed that Americans have changed their driving habits to cope with high gas prices. Now with gas below $4 a gallon at nearly half of the gas stations around the country, increasing demand could slow or even end the daily gas price declines,” says Marie Dodds, public affairs director for AAA Oregon/Idaho.

The national and Oregon averages for regular gas have been falling since mid-June with this week marking the seventh consecutive week of declines. The major drivers of lower pump prices have been falling crude oil prices and a few weeks of seasonally low demand for gas.

All 50 states and the District of Columbia have lower prices now than a week ago, and 39 states, including Oregon, have double-digit declines. Colorado (-22 cents) has the largest weekly drop. Connecticut (-3 cents) has the smallest. 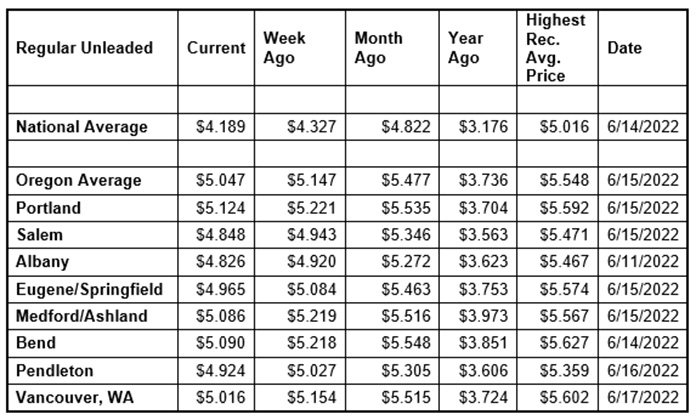