he short days and winter weather of January are making people drive less, lowering gasoline demand. But the price of crude oil has climbed higher as fears of a global recession ease. This is putting upward pressure on pump prices. For the week, the national average for regular unleaded rises six cents to $3.27.

“Demand for gas is usually lackluster this time of year and typically starts to tick up as the days get longer and spring break gets closer. So the main driver of higher pump prices this time of year is the higher cost of crude oil, which accounts for more than half of what we pay at the pumps,” says Marie Dodds, public affairs director for AAA Oregon/Idaho.

Hawaii ($4.99) is the state with the most expensive gas in the nation for the eighth week in a row, and drops below $5 a gallon. California ($4.43) is second and Washington $4.00 is third. These are the only three states with averages at or above $4 a gallon. This week 40 states and the District of Columbia have averages in the $3-range, and seven states have averages below $3 a gallon.

The difference between the most expensive and least expensive states is $2.06 which continues to be stark.

Oregon is one of 21 states with lower prices now than a year ago. The national average is two cents more and the Oregon average is 23 cents less than a year ago. This is the third-largest yearly drop in the nation. Montana (-34 cents) and Connecticut (-29 cents) have the largest year-over-year declines. Hawaii (+66 cents) has the biggest year-over-year jump. 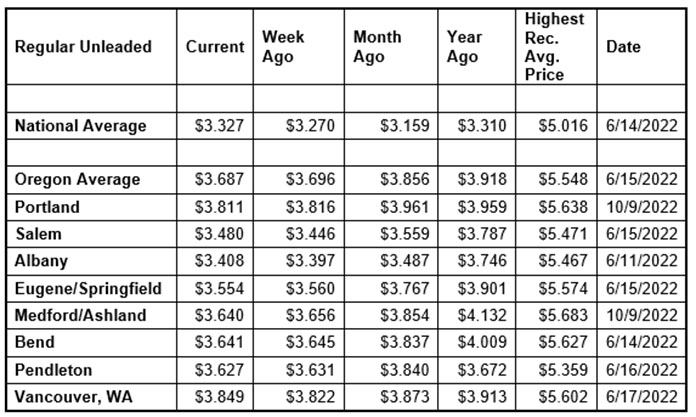