Some refinery and distribution issues in the Pacific Northwest are causing prices here to rise faster than the national average. For the week, the national average for regular climbs a penny to $3.30 a gallon. The Oregon average jumps seven cents to $3.90. This is the fifth-largest weekly jump of a state average in the nation.

Crude oil has surged to $80 a barrel. Events on the far side of the globe are fueling the recent rise. Social unrest and violence in Kazakhstan, a member of the OPEC+ alliance, have forced that nation to cut production. Before the recent flare-up of violence, Kazakhstan pumped nearly 2 million barrels of crude a day. In contrast, the United States, as the top oil-producing country in the world, pumped an average of 18.6 million barrels a day.

Here in the Pacific Northwest, some refinery and distribution snags have led to some supply disruptions. At least two refineries including HollyFrontier Puget Sound and Phillips 66 Ferndale have reportedly had some issues, impacting Washington and Oregon. Weather has also played a role. Mountain snow has made traveling over the passes challenging, and flooding has impacted roads in Washington.

“The West Coast region tends to produce about as much gasoline as is consumed. So when refinery and distribution issues put a crimp in supplies, prices can climb in a hurry,” says Marie Dodds, public affairs director for AAA Oregon/Idaho.

California ($4.65) and Hawaii ($4.34) continue to have the most expensive gas prices in the country and are the only states in the nation with averages above $4 a gallon, while 42 states and the District of Columbia have averages above $3 a gallon. 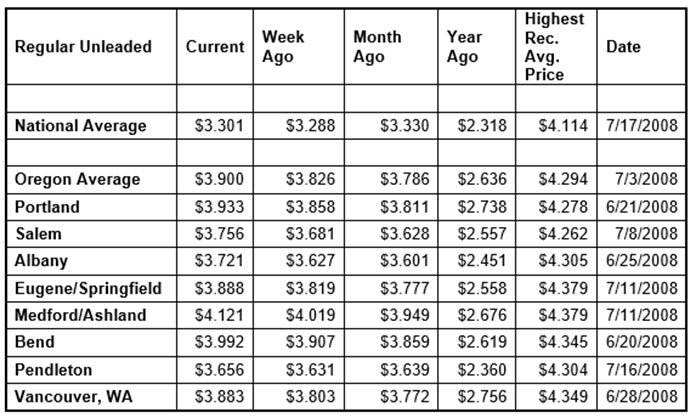