The national and Oregon averages skyrocket to new record highs after the price of oil jumped above $110 per barrel last week. Drivers are paying more to fill up in 49 states including Oregon.

The national and Oregon averages are both at new record highs, eclipsing the record highs set in March.

“The cost of crude oil accounts for more than half of what we pay at the pumps, so higher crude oil prices translate into more expensive gas and diesel. Unfortunately, these high pump prices are not likely to ease anytime soon,” says Marie Dodds, public affairs director for AAA Oregon/Idaho.

On average, about 53% of what we pay for in a gallon of gasoline is for the price of crude oil,12% is refining, 21% distribution and marketing, and 15% are taxes, according to the U.S. Energy Information Administration.

About 3% of oil, and a total of 8% of oil and refined products used in the U.S. last year came from Russia, while about 25% of Europe’s oil is imported from Russia. The U.S. is the largest oil producer in the world. Other top producers are Saudi Arabia and Russia.

Oregon is one of 49 states and the District of Columbia where prices have risen in the last week, and 44 states and D.C. have double-digit increases. Indiana (+28 cents) has the largest weekly jump. Nevada (+3 cents) has the smallest weekly gain. Utah (-1 cent) is the only state in the nation with a weekly decline.

California ($5.84) is the most expensive state in the nation and is one of three states with an average above $5 a gallon. There are 44 states and the District of Columbia with an average at or above $4 a gallon. 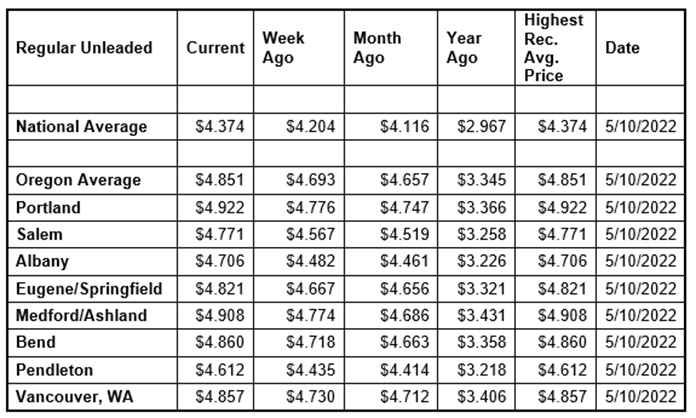